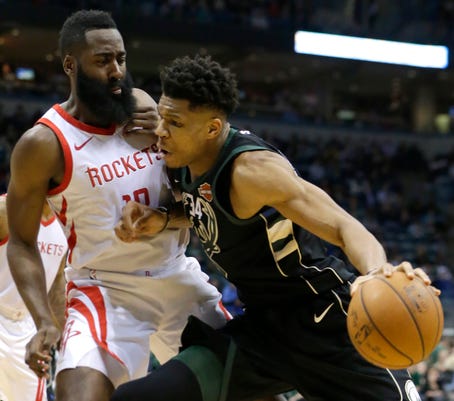 Yes, basketball is a team game. It takes all five players on the court to create a viable offense. Defensively, one player can’t guard five. Teamwork and the five-on-five interplay are what make the game especially exciting.

But sometimes it’s difficult to avoid the siren song of individual players squaring off — the temptation of concentrating on superstars going head-to-head is just too alluring. Reasonable or not, everything else can fade away when some of the best at their craft are going back and forth.

So as much as 7 p.m. Wednesday will bring the tip-off of the Milwaukee Bucks and Houston Rockets at the Toyota Center — a game that will be televised nationally on ESPN — it also will mark the beginning of another matchup.

It’ll be Bucks forward Giannis Antetokounmpo vs. Rockets guard James Harden. The Greek Freak vs. The Beard. The current MVP favorite vs. the reigning MVP in a clash between the two players who have distanced themselves from the pack as the league’s best performers this season.

Adding to the intrigue is that they are both unique and opposite. Take the MVP discussion, for instance.

“I need it,” Harden said last week when asked if he was hungry to bring home the award a second time. “I need it for sure. And I’m going to get it.”

Antetokounmpo, asked about the narrative of the MVP battle, had a different take.

“I don’t care about that, I just care about is winning,” he said. “It’s all about winning. If we win it’s going to take care of itself.”

Their stance on the MVP race is as dissimilar as their playing styles. Just ask Utah Jazz guard Donovan Mitchell, who went toe-to-toe with Harden in last year’s playoffs and met up with Antetokounmpo for the first time this season Monday night in Milwaukee’s 114-102 win at Fiserv Forum.

“They’re both unique,” Mitchell said. “With James, he has the ability to go for 40 and the same thing with Giannis. The only difference is Giannis is pretty much in the paint, shooting what, like 60 percent from the field, and James is a lot from the three.

“They’re both lethal in what they do. It’s very impressive and it’s tough to defend. … At the end of the day, they’re all-stars and they’re in the MVP race for that reason.”

All together, Antetokounmpo is averaging 26.6 points per game — with an effective field-goal percentage (59.4 percent) that outpaces Harden’s (54.3 percent) despite Harden’s proficiency from three-point range. He’s also putting up career bests with 12.6 rebounds and 6.0 assists per game.

For much of the early segment of the season, Antetokounmpo’s ascendancy made him the clear MVP front-runner. But Harden’s efforts over Houston’s past 14 games — including the past eight without injured all-star point guard Chris Paul — has catapulted him back into the now-tight MVP discussion.

During the 14-game stretch, Harden has averaged 39.4 points and 9.2 assists while shooting 40.6 percent on 14.4 three-point attempts per game and making 87.2 percent of his 13.4 free-throw attempts.  Riding Harden’s exceptional play, the Rockets have won 12 of those 14 games, including a win over the Denver Nuggets on Monday in which Denver sold out to trap and limit Harden, only for him to score 32 points and dish out 14 assists.

The one thing the Nuggets achieved was ending Harden’s 10-game streak of scoring 35 points or more.

“He’s been playing great, obviously,” Antetokounmpo said. “They’ve been hot as a team. It’s going to be a tough one. We’re going to go there and do what we’ve been doing all year and hopefully we can get a win.”

As disparate as their playing styles may be, with the 6-foot-11 Antetokounmpo collecting rebounds and dominating the paint while the 6-5 Harden has become a master in creating for himself and others, the two do share one particular trait. They both get to the free-throw line at a high rate.

Harden catches more flak for his league-leading free-throw attempts than Antetokounmpo, who ranks third. That’s because of Harden’s unique ability to contort and flail his body on both drives and on shots to draw foul calls. However, as a career 85.4 percent free-throw shooter, Harden capitalizes on these fouls at a higher rate than most oft-fouled players, who like Antetokounmpo are usually big men who operate on the more physical interior.

While Antetokounmpo and Harden won’t spend much time actually going head-to-head Wednesday and the game may at times devolve into a free-throw contest, the twice-annual spectacle of these two superstars at the top of their sport promises to be a must-see affair. Their teams are pretty good, too, if you can take your eyes off them.

Milwaukee Bucks: How has Thanasis Antetokounmpo compared to expectations? – Behind The Bucks Pass

Milwaukee Bucks SVP Alex Lasry: If you want the Bucks to win the NBA Championship, ‘stay inside’ – WTMJ-TV