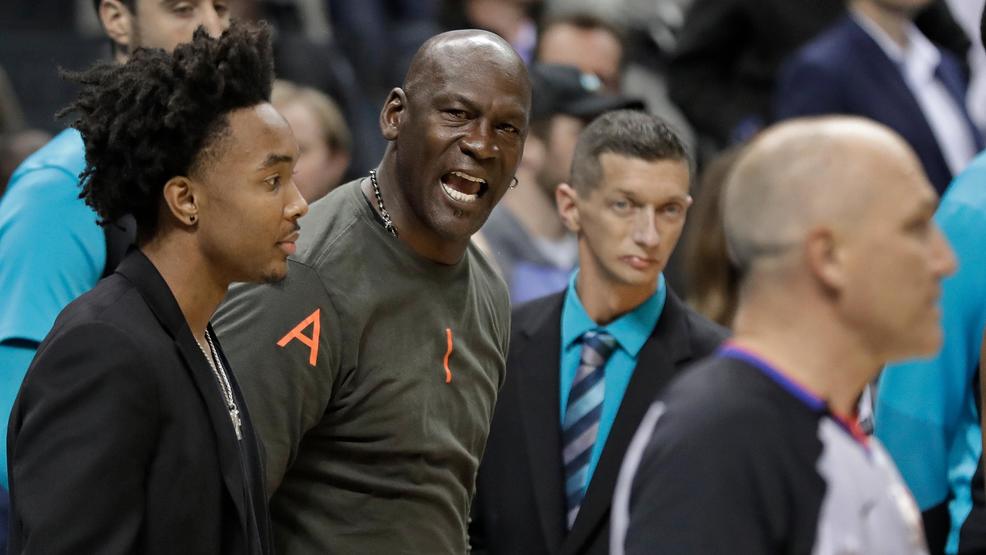 Charlotte Hornets owner Michael Jordan, center, shouts at an official in the final seconds of the second half of an NBA basketball game against the Detroit Pistons in Charlotte, N.C., Wednesday, Dec. 12, 2018. Officials ruled the Hornets had six players on the floor in the final second of the game, giving one free throw to Detroit. The Hornets won 108-107. (AP Photo/Chuck Burton)

CHARLOTTE, N.C. (AP) — Jeremy Lamb hit a 22-foot jumper from the right wing with 0.3 seconds left, and the Charlotte Hornets rallied from a late 10-point deficit for a wild 108-107 win over the Detroit Pistons on Wednesday night.

Lamb’s buzzer-beater did not come without controversy or drama.

As Lamb released the ball, Malik Monk ran off the Hornets’ bench and onto the floor early to celebrate the made basket.

Officials reviewed the play and called one-shot technical on the Hornets for having six men on the court. The basket still counted. The Pistons made the technical free throw, but the ensuing long inbounds pass was intercepted.

Kemba Walker finished with a game-high 31 points and had nine assists and eight rebounds for the Hornets, who won their third straight and moved into sixth place in the Eastern Conference — a half-game ahead of Detroit.

Blake Griffin had 26 points, 10 rebounds and seven assists for the Pistons, who have lost six in a row.

Trailing by 10 with 6:23 left in the fourth quarter, Walker put his team on his shoulders.

Andre Drummond answered with a three-point play in the low post to tie the game with 35 seconds left, ending a six-minute scoring drought for the Pistons. Both teams missed opportunities before Lamb’s score off a dish from Walker.

Hornets: Michael Kidd-Gilchrist did not play for personal reasons. … Team owner Michael Jordan sat at the end of the Hornets’ bench. … Charlotte got a big lift off the bench in the first quarter from Willy Hernangomez, who had nine points in final four minutes as the Hornets built a 37-25 lead.