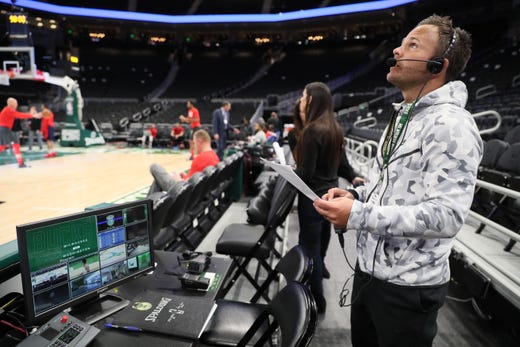 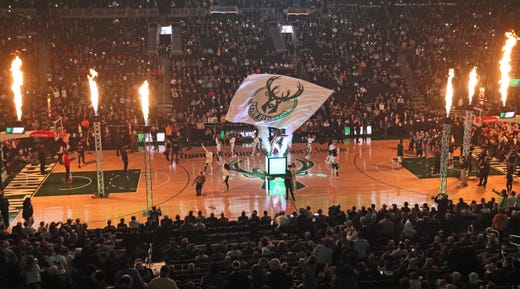 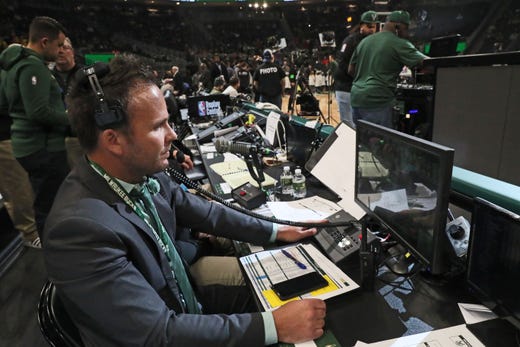 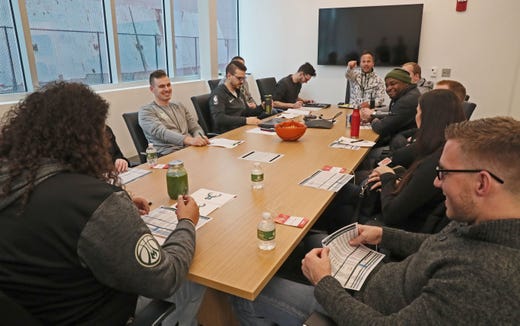 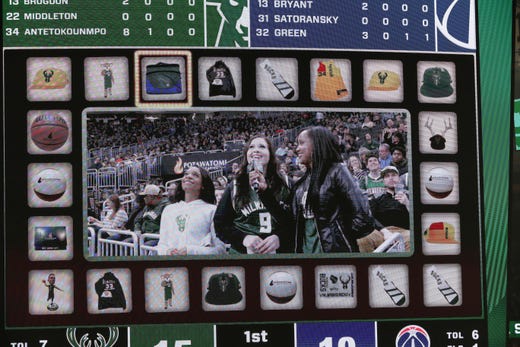 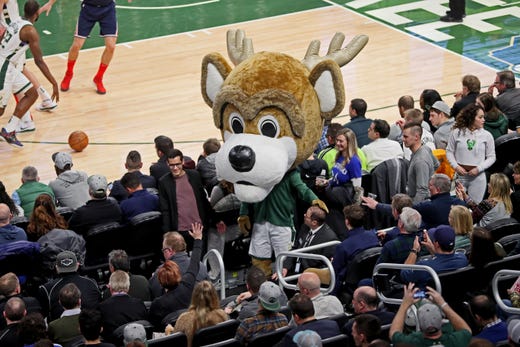 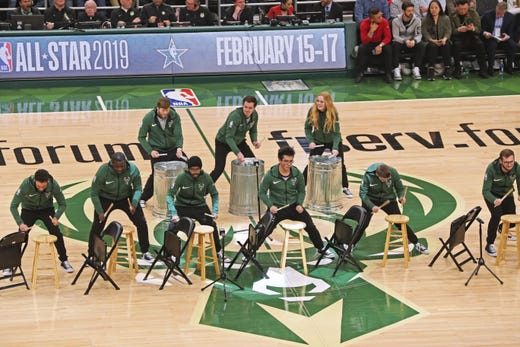 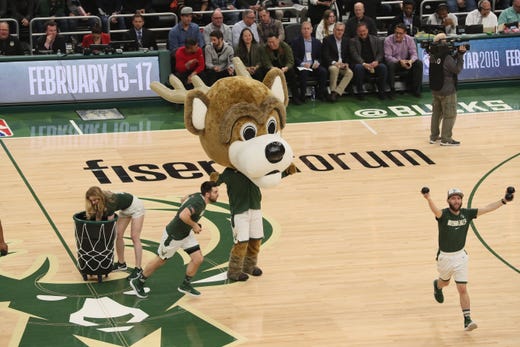 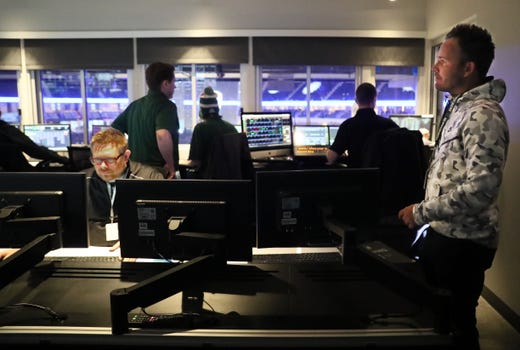 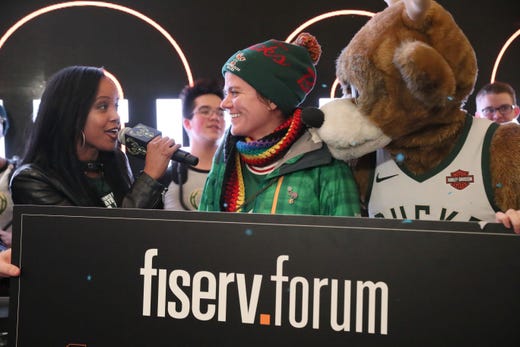 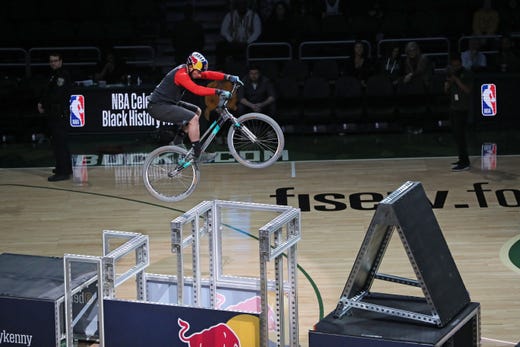 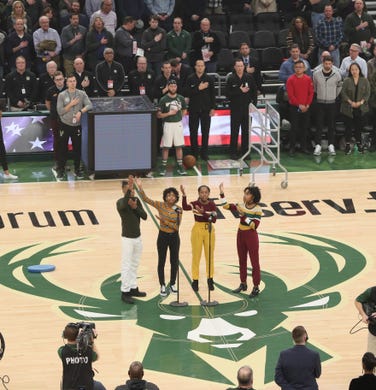 It’s two hours before tipoff and Johnny Watson has gathered the Milwaukee Bucks entertainment team in a standing-room-only conference room at Fiserv Forum.

The agenda: dozens of carefully timed blasts of entertainment filling every pause in action in that night’s game against the Washington Wizards.

Watson runs through the list line-by-line, minute by minute, and pauses at the Fiserv Forum/Arena Spotlight. The live shot will highlight an enormous new Kareem Abdul-Jabbar bobblehead — yet another attraction that’s perfect for fan selfies.

“I’ll ask it some some questions,” Brown replies.

Ninety minutes later, in between plugs for American Transmission Service and Jack Daniels, Brown is live at the arena’s newest attraction.

Kareem’s enormous head indeed bobbles, moving slowly up and down, as do the heads of two Bucks Dancers, standing nearby, in perfect sync.

It’s a fun moment, one of dozens that are part of the high octane three hour in-game extravaganza with dancers, games, acrobats and a blizzard of free T-shirts that Watson will oversee more than 40 times a year at Fiserv Forum.

The shows, which recently even included halftime performances by a couple of local drag queens on Pride Night, envelop the Bucks home games.

Watson’s job: entertain some 17,000 fans during breaks in the action and build excitement that the team can feed off — especially during the fourth quarter of close games.

“I want stuff happening when you walk in the door,” he said during the Wizards game Feb. 6 from his perch next to in-game announcer Eric Jensen. Watson’s in constant communication with his team, and his cues trigger action on the scoreboard almost instantly.

“It’s all about creating memories for the fans, making it so that being here is a memorable experience — from the minute you walk in the door until you leave,” Watson said.

Although it’s a sport with an international television and online audience of millions, the NBA believes that building “fandom” begins with home courts.

“That’s where you build the foundation,” Watson said. “That’s when we create the stories that you will tell.”

The programming begins when the doors open 90 minutes before game time. Many fans come early to see the new arena, watch player warmups and take in the show on the massive center hung video display.

The script balances the commitments the Bucks have with their many sponsors while connecting the team with casual and hardcore fans alike. Since moving to Fiserv Forum from the Bradley Center, the Bucks amped up the glitz, fire and confetti.

“The new arena speaks for itself,” Watson said. “We now have state of the art lighting and sound and the huge scoreboard to make a great experience.”

The Wizards sent their in-game team to watch Watson’s team and learn about their new tools, including a video room with two dozen technicians. Each has a specific role, including a woman who superimposes goofy emojis over the faces of players and fans.

Thank you! You’re almost signed up for NewsWatch Delivered

Keep an eye out for an email to confirm your newsletter registration.

In addition to the envious group from the Wizards, the NBA has taken notice.

Watson leads 150 full- and part-time employees, and the planning for each game begins months in advance.

Every timeout is scripted, including the locations of key players including mascot Bango and energetic in-game hosts Brown and Melanie Ricks who preside over contests, games and other activities. They show up at all corners of the arena, throughout the game.

“I want to show as many people in the crowd as possible,” said Watson, who has been in the job for 15 years. He’s been honored by the NBA several times and was among the Bucks entourage called to help stage the recent All-Star Weekend in Charlotte.

Wild cards abound at every game. Some can be planned in advance, such as an honor for the one-millionth fan to visit Fiserv Forum or a celebration of the birthday of former team owner and former Sen. Herb Kohl.

Other things fall into the “stuff happens” category that comes with live entertainment, Watson said.

A halftime show featuring BMX biker Kenny Belaey created some consternation because of the amount of ramps and other props that needed to be set up on the floor.

“We need to burn some time so they can set up the halftime show,” Watson instructed the video production crew before the game.

Although the Bucks are playing great and feature one of the league’s premier players, Giannis Antetokounmpo, the entertainment plays a crucial role in establishing home court advantage, Watson said.

“If we engage the crowd the right way, I one hundred percent believe we can influence the outcome of a game,” he said.

Although the players seem oblivious to the goings-on, they plays a crucial role in establishing home court advantage, said Bucks player Pat Connaughton.

That’s especially true for “routine” games, such as those on a week night against a so-so team.

“Those games matter just as much and we’ve got to get up for those games,” Connaughton said.

/A roaring crowd helps. “I think that it’s one of the most under-rated parts of sports — home court advantage,” he said.

“The entire event is a spectacle and the game is the focal point.”

“They have incredible fans that get here early,” said Charlotte Hornets forward Marvin Williams following a recent game. “They’re always very loud. This team really feeds off their energy. This is a tough building to play in.”

The Bucks schedule a national touring performer like Belaey for halftime for about 15 games. Other than that, there’s no difference in how the games are staged, Watson said.

“We treat them all the same. We want every fan — all of them — to have the same experience,” Watson said. “Even if we’re up against a bad opponent, I don’t do anything different.”

Petersen said the NBA makes a big effort to survey fans and get feedback on their experience at games.

The league and the Bucks have heard concerns that the in-game din might be too much for some fans. The Bucks have tried to factor in “quiet” moments during the action that fans seem to appreciate.

“You want to hear the squeak of the shoes, hear them talk to each other on defense,” Peterson said. “Those are really cool moments in games.”

But when the fourth quarter rolls around, it’s Brown who extolls fans to get yelling.

“I don’t even know what the score is until the fourth quarter,” Watson said.

Chances are good that fans will leave happy this season. The Bucks only have a handful of losses at home.

RELATED: The Bucks made hilarious use of the famous Kawhi Leonard laugh

Milwaukee Bucks: Starting lineup beginning to mesh on both ends – Behind the Buck Pass

Milwaukee Bucks: 3 takeaways from 112-109 win over Dallas Mavericks – Behind the Buck Pass