A short history of Fiserv Forum, which has its grand opening on Aug. 26, 2018.
Wochit 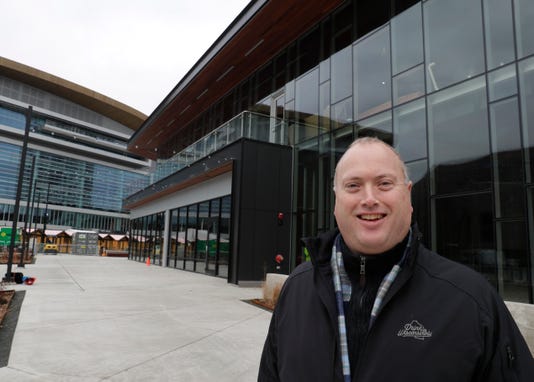 John Casanova, president of Drink Wisconsinably checks out construction progress of the space for the company’s new Fiserv Forum venue that will feature a gift shop and three bars. The space is in a prime location in the southern-most building in the Fiserv Forum entertainment plaza. RICK WOOD / MILWAUKEE JOURNAL SENTINEL ORG XMIT: 20097317B(Photo: RIck Wood, Milwaukee Journal Sentinel)Buy Photo

Drink Wisconsinbly, a Milwaukee-brewed lifestyle brand and bar, will bring its T-shirts and old fashioneds to the entertainment block outside Fiserv Forum.

The renewable five-year lease for a store in the plaza is a big step for another fast-growing local company that has partnered with the Milwaukee Bucks.

For the Bucks, the lease fills a key space in the cluster of buildings that line the east side of arena’s entrance.

“We’re all about people’s allegiance to Wisconsin and how proud we are of our state,” said Drink Wisconsinbly President John Casanova. “This is an important next phase for us.”

Drink Wisconsinbly will occupy 3,500 square feet of the large building that the Bucks development arm erected at the south end of the entertainment complex. The vast majority of that building — about 25,000 square feet — will house Punch Bowl Social, a bar, restaurant and gaming emporium that can hold up to 1,000 customers. 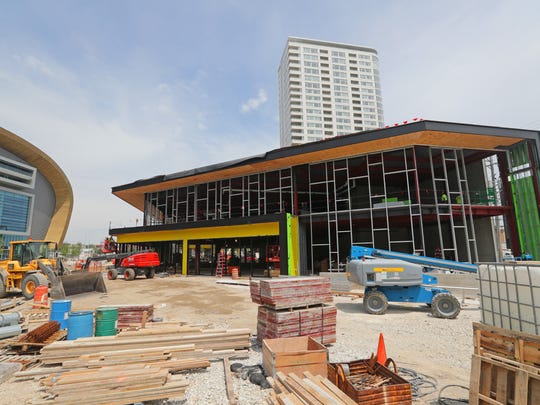 Both businesses are expected to open in the spring, along with Good City Brewing Co., which is creating an 11,000-square-foot taproom in a new building along E. Juneau Ave.

In October, the Bucks opened their beer garden, featuring a large outdoor television and outdoor seating, and the area has become a popular gathering spot before and after Fiserv Forum events.

RELATED: Milwaukee Bucks raise a cold one at grand opening of beer garden outside Fiserv Forum 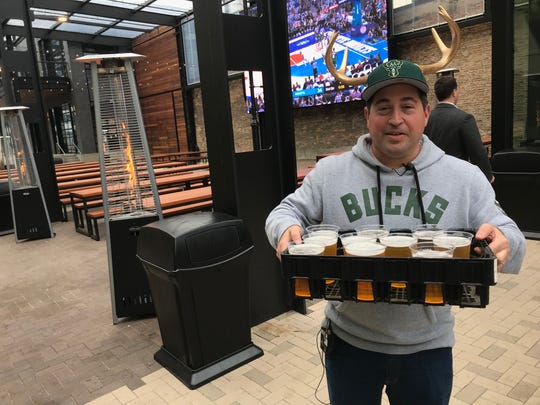 Drink Wisconsinbly’s location faces south and is just off of West Highland Avenue.

It will be among the first things visitors see as they approach the arena from downtown. That’s key, Casanova noted, because he expects his business to have strong appeal for tourists.

The store will have three bars, two outside walk-up service windows and a large display of T-shirts, mugs and other items bearing the Drink Wisconsinbly logo.

“The brand is so appealing to a wide range of people, from millennials to grandmas,” Casanova said.

In 2016, Drink Wisconsinbly opened a small bar and restaurant at 135 E. National Ave., in the Walker’s Point neighborhood.

The company has a growing e-commerce business, and its merchandise is available in about 150 locations around the state. Casanova, who has a background in the beer and hospitality industries, was brought on earlier this year to help accelerate the business growth.

The Drink Wisconsinbly name also is used on three bars inside Fiserv Forum that are operated by Levy, the Bucks’ concession contractor.

Drink Wisconsinbly will be a high-profile presence in the entertainment plaza, which the Bucks plan to use heavily year-round. The Christkindelmarket holiday market is currently on the plaza through the end of December.

“We think that it’s going to be ‘the’ gathering place for all of Milwaukee,” said Michael Belot, senior vice president, Bucks Ventures and Development.

“It’s one of the last pieces of the puzzle to make this a reality.”

Drink Wisconsinbly expects to host events such as cheese curd and old fashioned tasting contests to the plaza, Casanova said.

“We’re going to do our best to fit in with the other tenants of the plaza,” he said.

Another reminder: The Bucks will not trade Giannis Antetokounmpo – Yahoo Sports