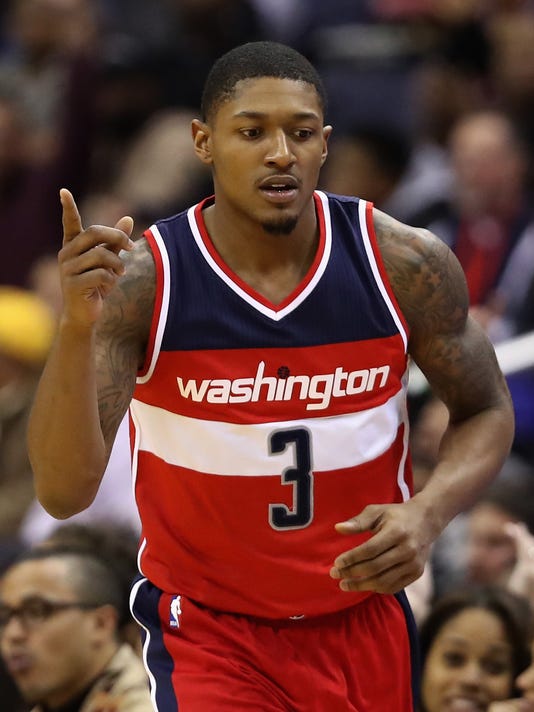 Bradley Beal of the Washington Wizards celebrates after scoring against the Detroit Pistons at Verizon Center on December 16, 2016 in Washington, DC.(Photo: Rob Carr, Getty Images)

It goes beyond the 25.6 points and 9.1 rebounds and five assists per game he’s averaging through 25 games.

The Detroit Pistons’ offensive rating when he’s on the floor is 107.4 points per possession.

When he’s off, it plummets to 100 points per possession.

He leads the league in touches per game as he’s emerged as the offensive focal point.

Blake Griffin is the first @DetroitPistons player to score 50-points in more than a decade, toppling the 76ers in the process. #NBApic.twitter.com/ywAsMLagAR

And that’s the issue for the Pistons as trade rumors start heating up Saturday, the day that many free agents signed in the offseason become eligible for trades.

There is no one close to Griffin on the roster.

“You probably need a couple of folks like that, in my opinion,” Pistons owner Tom Gores said after Griffin’s acquisition last season. “We didn’t go searching with that philosophy, but it did come to us and we just couldn’t not afford to look at a guy like Blake, who can really change your franchise. We weren’t deliberate about (finding a star) because we’re building the team one by one, but you see it in the league the elite teams have a few Blakes.”

The Pistons made the deal despite Griffin’s expense (he is in Year 2 of a five-year, $171-million contract) and injury history in a gambit to land a star-level talent.

With him likely on the books through the 2021-22 season, the front office under senior adviser Ed Stefanski is tasked with finding a way to maximize Griffin’s tenure with the Pistons.

The best way to do that?

That goal that will be front and center – even past the Feb. 7 trade deadline.

As one of the worst shooting teams in the league, the Pistons need wing help.

With Reggie Jackson struggling, they wouldn’t mind an upgrade at point guard.

There are two players that come to mind.

With the Washington Wizards reportedly considering a sell-off of talent, the Pistons would have great interest in shooting guard Bradley Beal.

He’s more than just a shooter. He’s able to get to the rim for creative finishes.

Beal averages 23.1 points per game, the third-straight season as a 20-plus scorer.

When it comes to assets, the Pistons could offer future draft picks and possibly Luke Kennard, the team’s top asset on the roster.

Another obvious target if he were to become available?

The Pistons were interested in January and they would be interested now – maybe even more so with Jackson struggling to fit with the offense designed around Griffin.

Walker makes $12 million (a top value), but becomes a free agent in the offseason, which means an acquisition would be a rental.

The Hornets are squarely in the playoff chase so it’s doubtful Walker will be made available – which is an issue.

With the Pistons needing a point guard upgrade, could Wall, averaging 20.8 points and 8.7 assists per game, be an option?

Not with his contract.

Two sources with firsthand knowledge of the situation told the Free Press there’s no appetite for Wall’s contract – although he would be an obvious upgrade.

But there are other potential fire sales.

Aside from rookie point guard Collin Sexton, any member of the Cleveland Cavaliers could be had.

If the Pistons were to give up an asset, they could probably even unload one their undesirable contracts (Jackson, Jon Leuer and Langston Galloway).

But sources say the Pistons aren’t going to compound the mistakes of the previous front office with another one.

Ninth in the Eastern Conference at 11-16 (with an easy schedule), some think it’s only a matter of time before the Heat president Pat Riley punts on this season.

A league source says the Pistons would have interest in shooter Wayne Ellington, a career 38 percent 3-point shooter.

He is on the books for one more season – just like Jackson.

And Dragic is injury prone.

But he is natural point guard and would fit with the Pistons.

Is there surprise potential?

“The trade deadline is one or two things,” Horst explained. “You’re trying position yourself for the end of the season or for the next season. People perceive an opportunity to win a championship this year in the Eastern Conference because of LeBron (James joining the Lakers in the West) and Houston and Golden State showing some signs of weakness.

“If you think they’re weak, you’re probably underestimating how great they’ve been, but you perceive an opportunity in both conferences.”

Two days later, Horst pulled the trigger with an eye toward both goals – picking up guard George Hill for this season. Hill’s contract is only partially guaranteed for next season, so it also creates financially flexibility.

Friday brought news of the botched three-team trade between the Grizzlies, Wizards and Suns. Then early Saturday, the Suns and Wizards reportedly reconvened and Trevor Zariza went to D.C. for Austin Rivers and Kelly Oubre Jr.

Can the Pistons get in on the action?

With so many teams looking for upgrades, it’s hard to see anything significant occurring.

Could a less significant move be in the works?

That would qualify as a blockbuster move geared toward the future with Jackson off the books after next season.

One thing to remember – the Pistons payroll is pushing up against the NBA’s $123.7 million luxury tax line.

The Pistons are not going over that line, complicating the addition of salary.

Considering the team’s state – sitting at 13-13 going into Saturday’s game against the Celtics – that’s the prudent choice.

But can the Pistons upgrade around Griffin under those parameters?

Milwaukee Bucks: Grading their new additions one month into 2020-21 season – Behind The Bucks Pass

Milwaukee Bucks: 3 takeaways from 125-123 loss to Brooklyn Nets – Behind the Buck Pass