A link has been sent to your friend’s email address.

A link has been posted to your Facebook feed. 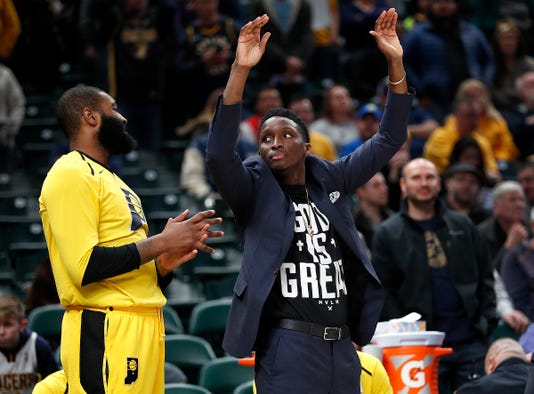 Indiana Pacers guard Victor Oladipo (4) cheers on his teammates in the second half of their game at Bankers Life Fieldhouse on Tuesday, Dec. 4, 2018. The Indiana Pacers defeated the Chicago Bulls 96-90.(Photo: Matt Kryger/IndyStar)

Indiana Pacers All-Star guard Victor Oladipo said his right knee felt significantly better during practice Tuesday than it did in Los Angeles two weeks ago, the last time he had tested.

Oladipo was non-committal about whether he would play against the Milwaukee Bucks on Wednesday and said he expects to be on a minutes restriction when he returns. Coach Nate McMillan confirmed both of those sentiments, listing him as questionable.

The medical staff will determine if Oladipo is ready to play, but he has not practiced in nearly a month so conditioning will also be a factor.

“I learned a lot sitting out about my team, my teammates and myself,” Oladipo said.

When Oladipo was in LA after a 4 on 4 drill he was miserable about the way his rt knee responded. Said it’s “like night and day” by comparison today #Pacers

Oladipo came out of the Pacers’ game against the Atlanta Hawks after playing less than five minutes on Nov. 17 and has not played since. Last season, the Pacers were 0-7 in games Oladipo missed but they are 7-4 this season, including a victory in the Hawks game.

Oladipo with the fly by 3 #Pacerspic.twitter.com/OyUO2p8k9J

Victor working 5-on-5 today at #Pacers practice. Definitely starting to look like himself. pic.twitter.com/0eu593uDpC