A brand new Milwaukee Bucks season tips off tonight against the Charlotte Hornets – with an extra all-caps, bold font emphasis this year on the word “new.” There’s a shiny new arena – complete with a shiny new plaza right next door – a new coach, new faces on the team and new heightened expectations thanks to the Bucks’ plentiful additions and the Eastern Conference’s one big subtraction.

Joining this exciting cavalcade of new on and off the court is a new face and voice providing interviews and insight from the sidelines during Bucks telecasts this season: reporter Katie George, coming over from WDRB-TV in Louisville. 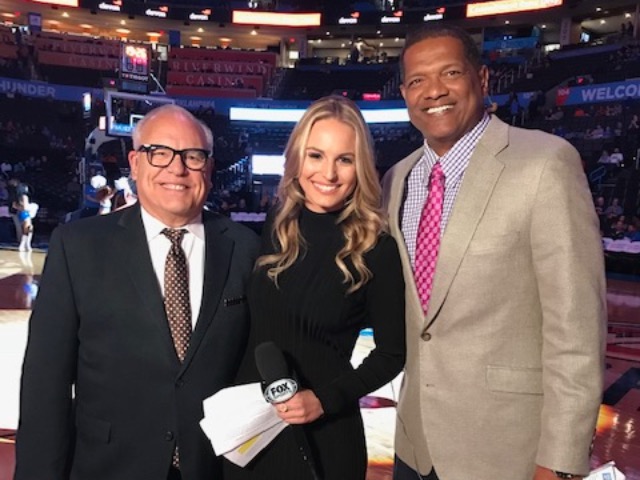 It’s a big move for George – not only in terms of the high-profile position but also as a literal move, living outside her hometown for the first time. But while she’s acquainting herself with the city and life on her own outside The Ville, sports are completely familiar turf for the former college athlete. George was a star volleyball player in her home state, winning two state championships and the honor of Prep Volleyball’s National Player of the Year in 2012. She continued her standout setting career at the University of Louisville, earning All-American honors as well as ACC Player and Setter of the Year in 2015. And in case that wasn’t enough competition, away from the court, she also scored the title of Miss Kentucky in 2015.

She’s now traded out Hot Brown sandwiches for cheese curds, a horse-racing hub for the home of sausage-racing and a college basketball town for a pro team on the rise – a rise hopefully beginning tonight in Charlotte. Before George and the Bucks tip off the season, however, we sat down with the new sideline reporter to talk about living in a UL/UK house divided, Twitter-beefing with Jim Paschke and the Bucks’ outlook for 2018-19.

OnMilwaukee: Living and going to school in Louisville, was basketball always a passion of yours?

Katie George: My dad is a huge (University of) Louisville fan. My dad’s whole side, actually, is Louisville fans while my mom’s whole side is Kentucky fans. My grandfather on my mom’s side played football for Bear Bryant at Kentucky, so he’s a diehard. So we kind of live in a house divided a little bit.

But my mom is a big Louisville fan too, and I’ve been going to the games since I was four or five years old with my dad. That was something that we always did together. We’re a big sports family, watching games together in the basement of the house. So basketball, for sure, was my first love from a sports standpoint. I’ve got two older brothers, and they played basketball growing up. I played basketball until about eighth grade, until I just picked volleyball specifically. But it’s always been a huge part of our lives.

So if your mom went to Kentucky, was she devastated when you decided to go to Louisville?

It’s funny: She never went to one UK basketball game in her entire college career, which is just crazy to me. She must’ve been a nerd. (laughs) But she converted quickly to a Louisville fan, in going with all the games with my dad. That was an easy switch for her. But when I told my grandfather who played at UK that I was going to Louisville, he said, “I’ll come to your games, but I will wear white. You won’t catch me in red.”

Obviously you’re not just a part of an NBA broadcast. You’re a part of a contending team with a new stadium and a global superstar. What’s it like being in the middle of all of that? 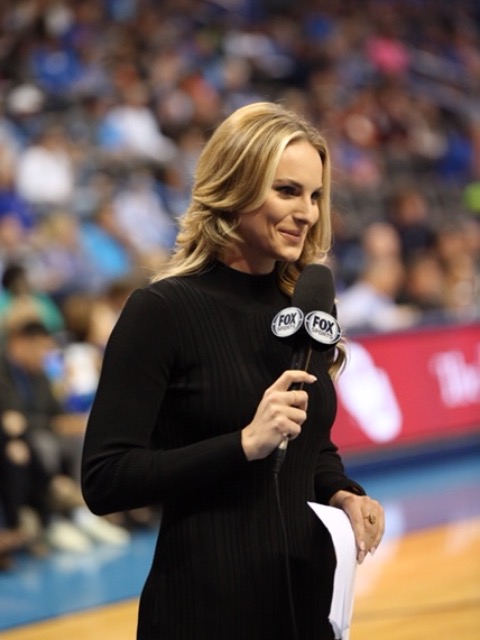 I don’t think I really realized the magnitude of what this job meant when I first received the call from Barry (Baum, Bucks VP of Communications). Now that I’m here, I just feel so blessed because everyone says to me, “Wow, you’re getting in at the right time,” and I really feel that way. Fiserv Forum is incredible – and that was my first task, coming here and seeing Fiserv Forum. And then obviously you add Giannis. To be able to cover such a superstar like that – and somebody who’s so humble and such a great person – has been pretty incredible in just these first few months.

But I’m blessed just to be in this type of culture. I think Peter (Feigin, Bucks president), from the top, does a really nice job, and everybody’s so welcoming. That’s the biggest thing I’ve noticed: People truly care how you’re doing and what you’re doing, and that means a lot to me.

You had your first pitch at Miller Park recently. How much preparation and how much pressure was there for that?

Good luck to you and the @Bucks this season. pic.twitter.com/FyJqg1ZYic

I was a bit nervous surprisingly. I can throw a baseball; I grew up playing softball – it was softball and volleyball for me, and then I picked volleyball. But we practiced in the quad out front and were throwing and warming up. I decided to go from the top of the mound, and that was probably a mistake.

I went full pitcher. You probably only get to do that one time in my life – maybe more, who knows – so I really wanted to go for it. And unfortunately I bounced it. It was on line, so I was proud of that. He didn’t have to reach for it. But it bounced in front of him, which I’ve caught a lot of flack for that.

What, for you, has been your favorite achievement: 2015 ACC Player of the Year, Miss Kentucky in 2015 or this job? Which one are you most proud of?

This one, for sure. I’ve said since I was 13 that I wanted to be a sports broadcaster. That was the first time I saw Erin Andrews on ESPN, and that’s when I said, “I’m a girl. I love sports. I love TV. That’s something I should do.” And for me, it’s never really veered from that. I don’t know if that’s to a fault, that I should’ve looked at other things potentially to do after college. But since then, it’s been working toward getting to a position to have a job like this.

So, for me, being able to set that goal – that I wanted to cover a professional team outside of Louisville, whether that would be football or basketball, and that I wanted to work for a national broadcast team – and finally achieve it, to be here covering an NBA team in Milwaukee is pretty incredible. So I’m pretty proud of that.

Were your parents always supportive of you going into media and sports media?

My brothers were the ones who were like, “You need to be going into business; you don’t need to be dabbling in TV.” My dad actually encouraged the dream when I was young, because he was a huge fan of Walter Cronkite. He always wanted to be a broadcaster, but said that he didn’t have the guts to really go for it. So having him pushing me and encouraging the dream has been huge. They’ve never said veer from the path. They’re very supportive of anything I’ve ever wanted to do. Well, besides Miss Kentucky. They were not supportive of that.

I was playing volleyball and was super busy with school, and I said I was going to do this pageant. They said, “Why? You’re so busy! You’ve got so much going on. Don’t add to your plate.” Then, with the negative connotations of pageantry: “You don’t want to be one of those girls.” But I said let’s just let me try it, let’s see what happens. Who knows; I probably won’t win, obviously – I’ve never done one. So they said fine, I could do it – but I couldn’t spent any money. So the only money I spent was on a bikini; I wore my prom dress from senior year. I could still fit in it, thank god. (laughs)

It was just watching YouTube videos and practicing questions with my roommate in college. And then I went out there, ended up winning, and my dad said, “Never listen to me ever again. If you want to do something, do it.” He was very proud.

That was your first pageant?

I walked in in Chuck Taylors and a Louisville volleyball shirt and my hair in a bun, and all these girls have full-blown hair, high heels, rhinestones, the full nines. I thought, “Boy, what have I got myself into? I stand no chance.” And then, lo and behold, I heard them call my name, and it was the craziest thing.

Have you encountered people who view you through the negative connotations or stereotypes of pageantry, or have people been pretty accepting and open-minded?

At first, there’s definitely people who think, “Oh, it’s just another pretty face, a blonde girl that they’re dressing up the sidelines.” But once you get to know me and know how passionate I am about the sport, how knowledgeable and hard I work, that’s how I try to approach it. There’s definitely going to be people who don’t care to get to know me, but I don’t really focus on that. For the most part, people, once they get familiar with me, they really see that I’m genuine and that I really care about what I do and it’s not just playing TV for me.

There was a little bit of a Twitter beef I noticed recently between you and Jim Paschke. Any more beef we should expect during the season? 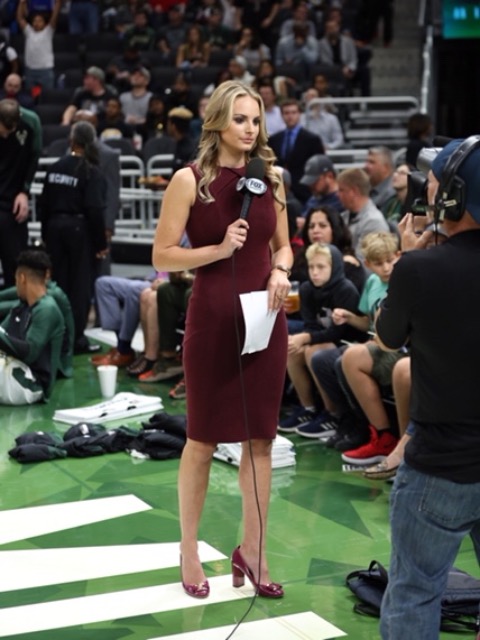 Potentially! I love to have fun – probably sometimes to a fault. I’ve been egging Jim on. It’s a funny dynamic. In Louisville, I worked in the sports department at my old station, and I worked with five older men and I was the only girl. They’re like father figures. And working with Jim kind of reminds me of that, so it’s fun to poke fun with each other. And that was a game that wasn’t on TV and it wasn’t streamed, so we were just sitting there as fans watching together. So we were like, “Let’s dress this up a little bit and have some fun on Twitter,” so people who can’t follow the game can have fun with us.

But I didn’t tell him that we were going to do that, so when I fired off the first tweet – that he was too tired to do the game – his phone started lighting up and he was like, “What’d you just say?!” (laughs) And it just went from there. I hope we can continue to do more of that, because when you see that banter and chemistry within a broadcast team, I think it adds to the viewers at home. They feel a part of it, and they like to see that too.

Watching the team, how far do you think they can go this season?

I just listened to somebody on NBA radio – it was the Cavs coach, Ty Lue – who named five teams in the East that were contenders and didn’t name Milwaukee. Which I think is just crazy. I didn’t get to watch them much last year – I obviously knew about Giannis – but seeing all the pieces they picked up in the offseason and how they fit now, since I get to watch them during practice, into Bud’s system, I think it’s good that they’re in the weeds. I think they’re going to be pretty incredible and they’re going to shock a lot of people – which would obviously make my job a lot more fun.