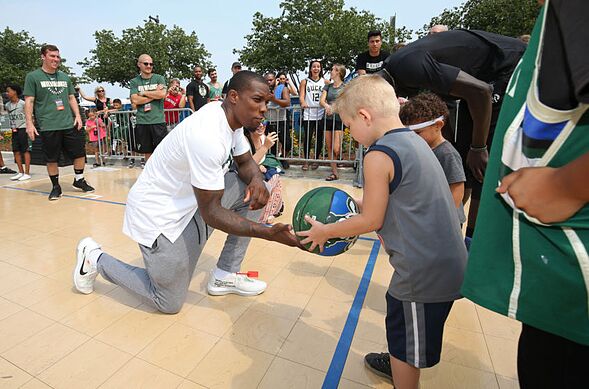 Entering a pivotal season that may very well end up deciding his future with the Milwaukee Bucks, we lay out five goals for Eric Bledsoe to achieve in the 2018-19 season.

A little less than a year since he arrived with the Milwaukee Bucks, Eric Bledsoe could be on the verge of yet another twist in his NBA career.

An impending unrestricted free agent next summer, a lot is riding on Bledsoe’s performance in what will be his first full season with the Bucks and obviously the first under new head coach Mike Budenholzer.

With that in mind, it’s nearly impossible not to frame Bledsoe’s season from that lens or to avoid thinking about what his future holds in Milwaukee, given the other pressing free agent questions the organization will face with other cornerstone players.

Of course, all of this comes after his own return to postseason play where he was thoroughly outplayed by Terry Rozier during the Bucks’ first round playoff series against the Boston Celtics.

When talking about what he took away from their playoff appearance last season at this year’s Bucks Media Day, Bledsoe remarked on the new presence Budenholzer will give to the squad in the face of that stinging end to last year:

“I think everybody was a little disappointed with how the season ended last year. I felt like we were a little bit better than that. We took some positives out of it and we definitely worked on our game a lot, and with Coach Bud, his offense is going to open everybody’s game up. Everybody is going to be a little more effective, not just one player.”

There will be no shortage of questions and concerns that Bledsoe will look to answer throughout the year, and it all adds to the mounting urgency the Bucks face to turn their long-standing inconsistencies into something far more fruitful.

So without further ado, let’s set five goals for Eric Bledsoe to accomplish for the 2018-19 NBA season.