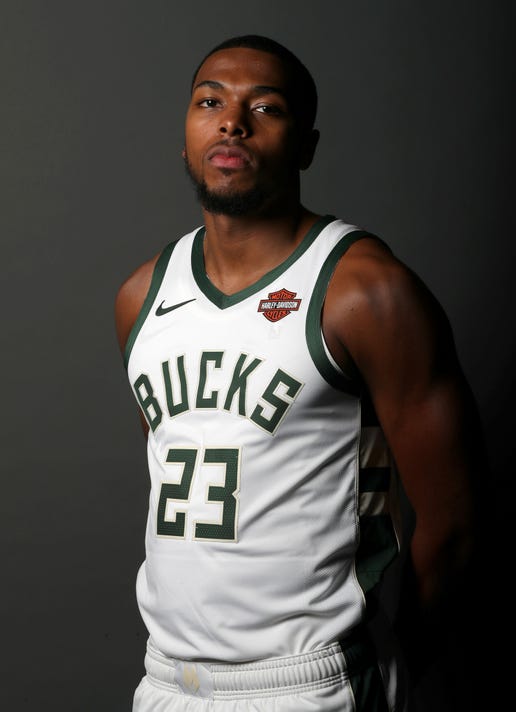 The Milwaukee police officer who provoked a confrontation with Milwaukee Bucks player Sterling Brown in January “was already on edge about something,” according to the woman who was in the car with Brown that night.

The video of the woman’s questioning by police in the parking lot of a Walgreens near West National Avenue and South 26th Street was released Friday in response to a public records request.

The woman told police she got out of the car when Officer Joseph Grams first approached, telling him her date was inside the store.

“When he walked up, I got out. I said I know he wasn’t supposed to be parked here,” she said on the video.

As soon as Brown came out of the store, Grams got between him and the car and pushed him, she said.

“I feel like it escalated to more than what it was,” she said.

The woman told officers she had known Brown a few days and they had been on a dinner date at Casablanca restaurant on Brady Street. She said she and Brown had been at her apartment in St. Francis and they were on their way back to his place, where she had left her car. Brown wanted to stop at the Walgreens on the way, she said.

The woman, who has been mischaracterized in talk radio reports and social media postings as a prostitute, could not be reached Friday. A check of the state’s online court database shows no criminal record for the 22-year-old. A check of city municipal violations shows no tickets for prostitution or anything else.

She was not arrested or ticketed that night.

The video of the woman’s interview with police was among dozens of videos and hundreds of pages of documents released Friday in response to the Journal Sentinel’s records request.

RELATED: ‘I gave in so they didn’t pull out their guns.’ Sterling Brown is still trying to make sense of his arrest.

Police confrontational from the start

A review of Walgreens surveillance video revealed that the incident unfolded quickly, a police report says.

When Brown came out of the store, he gave Grams his name and showed an identification card. Grams apparently did not recognize him as a player with the Bucks. Grams called for assistance and half a dozen squad cars showed up.

After the additional officers arrived, the situation became more tense, with police standing in a circle around Brown, yelling at him.

Brown was taken to the ground within 14 seconds, according to one of the police reports. He was then tased in the back.

As he lay there, one officer held his shoulder and another stood with a foot on Brown’s right ankle.

On one of the body camera videos released Friday, Brown can be heard hollering in pain.

Grams was suspended for failing to be respectful and courteous.

“He failed to explicitly state to Mr. Brown the reason for his detention and escalated the confrontation with his sarcastic dialogue, while unnecessarily engaging him in unproductive banter that neither aided in his investigation nor brought a peaceful resolution to the parking violation,” according to internal affairs charges released Friday.

Sergeants Sean A. Mahnke and Jeffrey Krueger were suspended for failing to be examples of professional police service.

The two supervisors “prevented Officer Grams from conducting his investigation to conclusion and allowed the situation to escalate,” according to the chief’s complaints against them.

The complaints concluded, “Effective leadership displayed by proper supervision could have led to a more positive outcome for the officers involved and Mr. Brown.”

During the internal investigation, Krueger admitted he “should have asked more questions of the officers before taking an investigative role,” according to an April 23 memo.

“It was never my intent to respond to the scene and make the situation worse,” he wrote. “The situation took a turn when it became my belief that the subject we were dealing with may be armed and was confrontational to questioning.”

Mahnke’s memo contradicts video of the incident, in which Brown did not appear to act aggressively.

Mahnke said he witnessed “numerous actions and behaviors, by Sterling Brown which were consistent with those of a person illegally possessing a firearm.”

“As I approached Mr. Brown’s vehicle and observed the used firearm targets on the back floorboard of his vehicle further leading me to believe that Mr. Brown was armed and his unusual antics regarding a simple parking violation were an attempt to delay officers from discovering that firearm,” he wrote in his April 24 memo. “My actions from that point forward were for my safety, the officer’s safety, and Mr. Brown’s.”

Mahnke said he started asking Brown questions about firearms but wasn’t able to tell the other officers he wanted a “pat down frisk for weapons without putting everyone at a tactical disadvantage” in case Brown had weapon.

“That fact made it necessary for me to step in and take control of Mr. Brown’s arm,” Mahnke wrote. “Mr. Brown immediately started to resist our efforts further playing into the possibility that Mr. Brown was armed with a firearm.”

None of Grams’ initial incident reports say anything about a gun, and Brown did not have one.

Attorney Mark Thomsen, of Gingras, Cates and Wachs, who filed a civil rights lawsuit on Brown’s behalf in June, said he was dismayed that the records were released just hours before a Bucks game.

“It’s one thing for the city officers to hurt and stand on Mr. Brown, threatening his career as a professional basketball player. It is quite another for the leadership of the city to throw all this information out a few hours before a game as if trying to distract Mr. Brown from performing at the level he can perform,” Thomsen said. “I had really expected something more civilized from my city and am once more saddened by its indifference to African Americans.”

In its response to the civil rights suit, the city said officers did not use excessive force, did not wrongly arrest Brown and did not violate his civil rights.