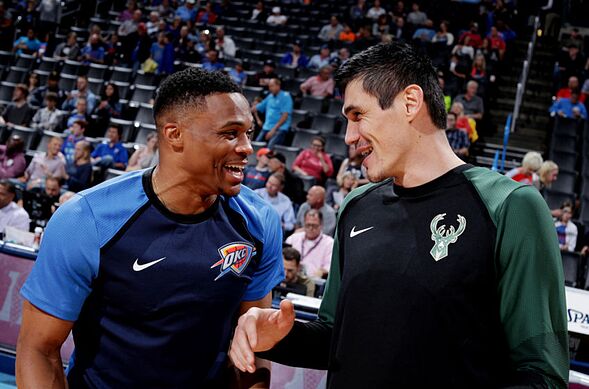 Without many of their top players on the night, the Milwaukee Bucks fought, yet came up short in overtime against the Oklahoma City Thunder to log their first loss of the preseason.

Despite their best efforts, all coming on a shorthanded basis, the Milwaukee Bucks fell short in overtime to the Oklahoma City Thunder Tuesday night at Chesapeake Energy Arena, losing 119-115.

Carrying a long list of players that were held out for the night due to rest or precautionary reasons, expectations surrounding the Bucks’ performance came lower than their last two preseason tilts. However, the Bucks put their best foot forward to get last night’s proceedings going as they experienced a hot shooting start to go toe to toe with the Thunder throughout the first quarter.

The Bucks came up with the upper hand at the end of the first with a 30-27 edge.

It was in the second quarter where control of the game transferred over to the Thunder, thanks to the Bucks cooling off offensively and Paul George carrying Oklahoma City to a midseason-like performance (George finished with 26 points on 13 shots).

Heading into halftime, the Bucks trailed the Thunder 55-48.

The start of the second half didn’t do much to turn around the Bucks’ fortunes as the Thunder only reinforced their lead into double digits and led by as much as 12 at the 2:25 mark of the period. From there, the Bucks quickly tacked on a couple of baskets to give them a 79-72 deficit going into the fourth quarter.

Not long into the fourth quarter was where the Bucks’ unlikely comeback bid started to form, even as the Thunder had plenty of answers to counter that. Eventually, though, the Bucks’ push to regain the lead broke through in the final couple of minutes in regulation.

Sticking to form, the Thunder put in a quick 7-0 run within the final minute and left the Bucks trailing by 4 with 18 seconds to go. Miraculously, thanks to a pair of free throws from Tyler Zeller and a last-second three-pointer from Tim Frazier, the Bucks evened things up at 107 to force overtime.

The Bucks struck first offensively in the extra frame with Pat Connaughton dropping in a three from Norman, Oklahoma and Shabazz Muhammad spinning his way with a lefty finish. Things stalled out from there and despite yet another big three from Frazier to even the score up to 115 with 36 ticks to go, the Thunder prevailed with Milwaukee native and two-way player Deonte Burton playing the part of hero for them.

With all that out of the way, let’s dig into what stood out the most in the Bucks’ preseason overtime loss to the Oklahoma City Thunder from Tuesday night.

Milwaukee Bucks vs. Oklahoma City Thunder: A Backup Battle to (Probably Not) Remember
How many All-Stars will they have?